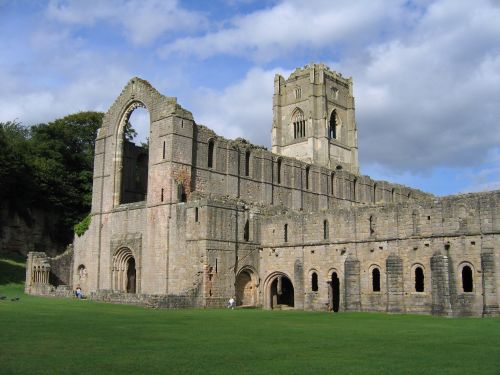 Fountains Abbey from the south-west. 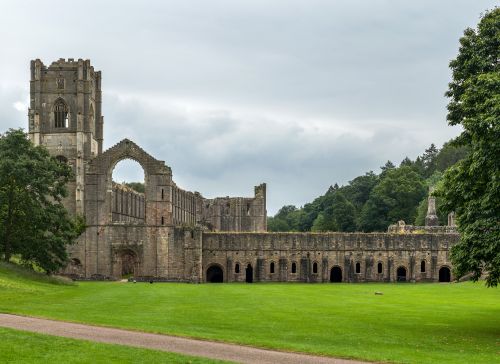 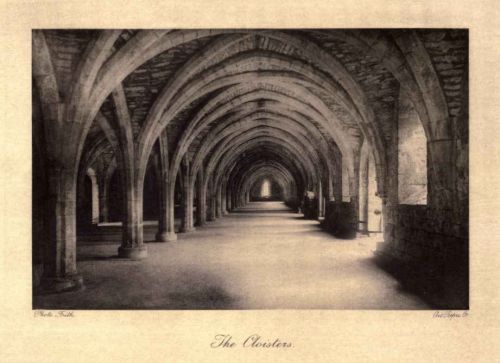 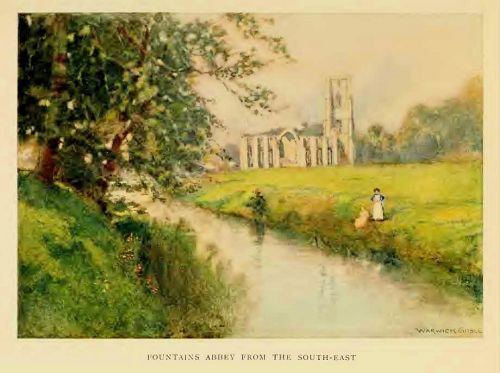 Interior of the abbey church looking down the nave.

Fountains Abbey is the home of the "Curtal Friar" and the scene of the main action of the ballad of Robin Hood and the Curtal Friar (Version A in MS of c. 1650, version B first printed 1663). This Cistercian monastery was founded in 1132 and dissolved in 1539. The ruins are a grade I listed building owned by the National Trust. Together with the gardens and adjacent deer park they form the UNESCO World Heritage site Studley Royal Park including the Ruins of Fountains Abbey.[1]

The picturesque effect, the magnitude, and the beautiful architecture of these ruins are not their only claim on our attention. They powerfully appeal to the mind by their association with ages past, the palmy days of monastic prosperity — the abbey, a place of learning when all around was ignorance &hdash; exercising an unbounded influence over the minds of men, when dominion elsewhere was held by force — entire in its magnificence, "when the castles of the nobility were dungeons, and the mansions of the gentry little better than hovels." Even a favourite legend of our boyhood has its locality here; and if we should task imagination to restore this roofless and tenantless pile, and people it with grave Cistercians, habited in coarse white robes and long black hoods, some gayer person- [p. 27:] ages in Lincoln green might intrude upon the scene, and the foreground be enlivened by the aquatic adventure of Robin Hood, and the merry outlaws' encounter with the Curtal Friar and the Ban-Dogs of Fountains.[2]

Now, all attention is naturally centered in the abbey, and fortunately, there is nothing intervening to distract the eye. We begin, immediately, to hasten down a precipice, arched, [p. 89:] deeply and picturesquely, in the woods; and, on arriving at the path by the side of the stream, will perhaps scarcely glance the diversity of scenes which the union of the dense woods with their liquid mirror presents.

Yet awhile may fancy beguile us with merry visions of the past. On this glade — doubt who can — the "Curtal Friar" of Fountains encountered Robin Hood, whom, as the old ballad goes, he at length threw into the Skell, and so grievously belaboured, that Robin, for once, turned coward, and called in the aid of his fifty stalwart yeomen; also that then the Friar, who

was brought to his senses and a truce. Before we reach the abbey, we shall be reduced to halt on a shady knoll; and, while reclining by the crystal Well that still bears the Outlaw's name, may chant the "Rime of Robin Hood" in one of the sweetest spots associated with his name.

Tradition points to the figures of a large bow and arrow and hound, graven on the north-east angle of the Lady Chapel, as a record of this dire affray. They bear no affinity to the symbols used by the masons; but have, I fancy, induced the report, mentioned in Ritson, that Robin's bow and arrow were preserved at Fountains Abbey.[3]

[c. 1650:]
When Robin came to Fontaines Abey,
Wheras that fryer lay,
He was ware of the fryer where he stood,
And to him thus can he say.[4]

[1663:]
That causd Will Scadlock to laugh,
He laughed full heartily:
'There lives a curtal frier in Fountains Abby
Will beat both him and thee.

'That curtal frier in Fountains Abby
Well can a strong bow draw;
He will beat you and your yeomen,
Set them all on a row.'

'If thou wilt forsake fair Fountains Dale,
And Fountains Abby free,
Every Sunday throughout the year,
A noble shall be thy fee.[5]

Some of the items below have not been seen. Although several briefly mention the Robin Hood traditions connected with the abbey, they are of more interest for the general background information they provide on the abbey.