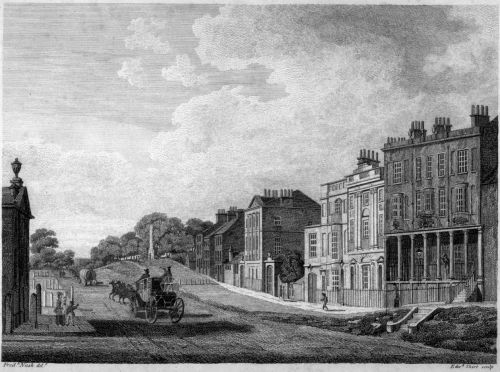 'South Entrance to Doncaster' / Miller, Edward. The History and Antiquities of Doncaster and its Vicinity, with Anecdotes of Eminent Men (Doncaster; London, [1804]); plate facing p. 1; engr. by Edward Shirt from painting by Fred Nash. 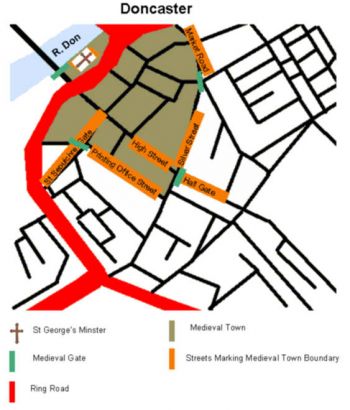 The town of Doncaster (formerly in the West Riding of Yorkshire, now administratively in South Yorkshire) is mentioned four times in the Gest (see Quotations below). According to Smith, the town is first referred to in a 4th century source as "Dano", while it occurs c. 800 as CairDaun and from 1086 on as 'Donceastre' (or similar). The etymology of the name is '[f]ortification on the Don'. The form 'Donkesly', used in De Worde's edition of the Gest (st. 456), is not recorded by Smith who does, however, cite the form 'Doncastell' (1418).[1]

In 1248, the town was granted a market to be held in the area around the Church of St Mary Magdalene; the market is still held. Major institutions in later medieval Doncaster were the Hospital of St Nicholas, the Hospital of St James (which housed a leper colony), a moot hall, grammar school, and a stone bridge with a chapel, Our Lady of the Bridge. By 1334 Doncaster was the wealthiest town in South Yorkshire and among the most important towns in Yorkshire as a whole. It even had its own banker. Demographically, the town was set back by the Black Death, from which it only slowly recovered. Doncaster was incorporated and its first Mayor and corporation were established in 1461.[2]

In the late Middle Ages, Doncaster was thus a well-known town, both in Yorkshire and nationally, that would have been a suitable stopping place for a traveler along the Great North Road.

Many other monuments ther ar, but so blemyshed by fablinge antiquitie that I dare not holde your Lordship with them: as St Tylds wormes figured in stone neer Whitby, wher they say no venemus serpent is seen;110 Mowlgrave castell, somtymes duke Wades howse, whose grave of incredyble length is showed neer ther;111 the extancyes of our outlawe Robin Whood in Barronsdall neer Doncaster; & such lyke dyvers, so dymmed and defaced by long tyme & lacke of trewe writeres as they seem to me to resemble the vews of thinges so far distant from sight as no ey can deem rightly of their shape or substance, thoughe yt may be dymly percevid that som thinge ther is.[3]

13. Morning, walked to cousin F.'s of Hunslet; rode with him and my other dear friends, Mr. Samuel Ibbetson and brother Thoresby, to Rodwell, where took leave of relations, thence through Medley, Pontefract, and Wentbridge (upon the famous Roman highway, and by the noted Robin Hood's well) to Doncaster, where we dined; thence by Bawtry, Scruby, Ranskall, to Barnby-on-the-Moor.
14. After a weary night rose pretty early; rode over Shirewood Forest, by the noted Eel-pie-house [...][4]

[...] Thence by Darrington and Stapleton Lees to Wentbrig, beyond which, upon the heights, may be seen York Minster, and it is said, also, that of Lincoln, but it was too duskish for us to do it; what I was more intent upon was the famous Roman highway, which is not only visible for several miles, but its complete dimensions, near which we drank at a curious spring, which receives its denomination from Robin Hood, the noted outlaw; after which we left the common road to Doncaster, and followed the old one, as is evident from the said Roman rig, which we followed for some time, in our road to Sprotburgh [...][5]

Doncaster.[6]
At Doncaster. A chapel, and a bridg with a gate over it. A man in armour, over the gate, in a threatening posture, looking over the battlements, cut in stone. Danum, Daunum, Caer Daun, by Neunius, was the station of the Equites Crispiani; the name is British, Davon the river, now Don. On this side Robin Hood's well, the Roman road appears in a very elevated ridg, composed of a huge body of stone, for miles together. Robin Hood's well a pretty ornament to the road; Sir John Vanbrugh the architect.

For the love of a knight
Syr Roger of Donkesly[9]