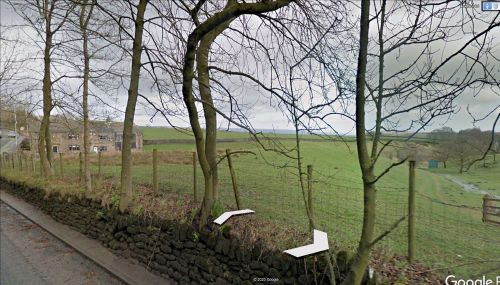 A piece of grassland on the east side of Manywells Brow (Keighley Road, A629), just north of Doctor's Bridge, c. 650 m NNW of Denholme, is entered in a mid-19th century tithe award as 'Brow & Robin Hood'.

'Brow & Robin Hood' are listed in the 1849 tithe award for Thornton in the parish of Bradford with Thomas Wheatley as landowner, John Spencer as occupier, state of cultivation as 'Grass', and an area of 3 acres and 33 perches (12975.23 m2).[1] While the 'Brow' is likely a part of the same natural feature that gave rise to the last element of 'Manywells Brow', one can only speculate as to what suggested the name 'Robin Hood'. One possibility is that it refers to wild plants that grew there. At least three wild flowering plants are or used to be known under the folk-name 'Robin Hood': Geranium robertianum, Lychnis flos-cuculi and Silene dioica. Since the information on nomenclature in the tithe awards was entered in a form field with the heading 'Name and Description of Lands and Premises' – usually interpreted as 'Name or Description' etc. by those who filled in the forms – it is entirely possible that a phrase such as 'Brow & Robin Hood' is not really a name but a descriptive phrase owners/occupiers came up with in response to the tithe commissioners' or their clerks' request for a name or description for a plot of land for which a name was not needed in everyday situations. See further the pages on Robin Hood (Denholme) and Robin Hood (Royston, Barnsley) (2).