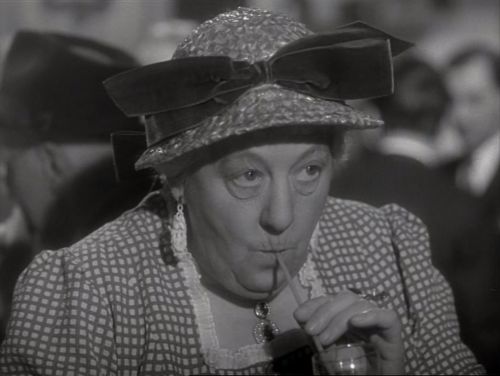 Margaret Rutherford as Miss Heather Honey / From the film. 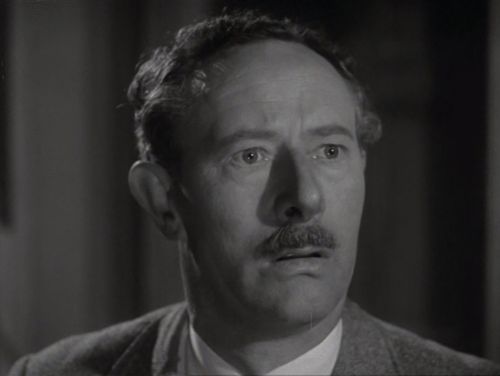 Richard Hearne as Henry Wrigley / From the film. 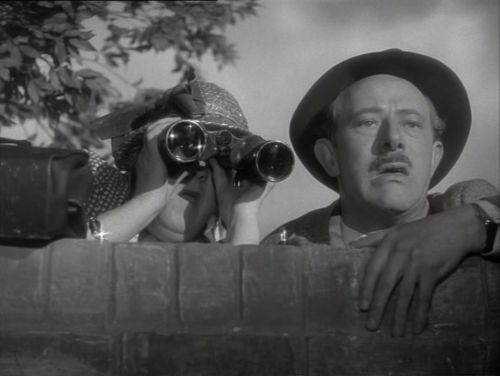 Miss Honey and Henry Wrigley spying on The MacAlister Buttercup Company Ltd. / From the film. 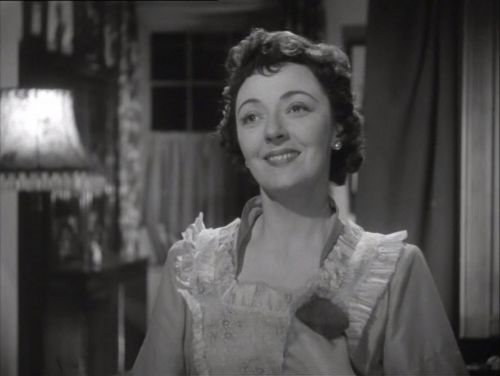 Fanny (Frances) Rowe as Mrs Marion Wrigley / From the film. 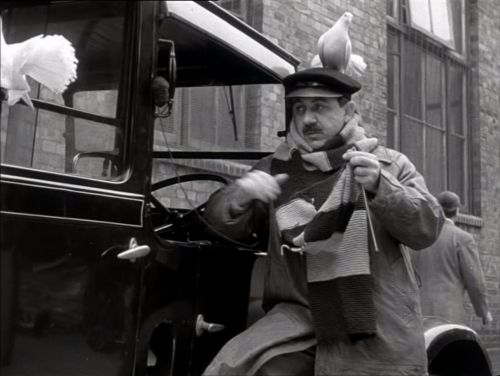 Sidney James, as Sidney, Miss Honey's driver / From the film.

The 1952 British film Miss Robin Hood has more Robin Hood-connections than just its title. One of its main characters writes an eponymous serial in a magazine named The Teenager, while one of his most avid fans is an elderly lady who runs an unofficial orphanage/thievery school, financed by activities of the sort depicted in the serial. When called upon, her wards turn out in force, armed with golf clubs, tennis rackets, billiard cues etc. On occasion she wears the kind of hat that is now universally recognized as a Robin Hood hat.

Henry Wrigley is asleep, dreaming about a woman and two girls – his daughters perhaps – burgling a stockbrokers, where they open a safe with a welder, intending to spend the loot on helping orphans, feeding pigeons and constructing playgrounds. In waking life he is the writer of "Miss Robin Hood", a serial published in a widely read magazine titled The Teenager.

Wrigley is contacted by an avid fan who wants an autograph. She turns out to be Miss Heather Honey. This eccentric woman, much older than the backfisch Wrigley expected to meet, provides bright, sunny and cheerful schooling in thievery for all her youngsters at her private home cum orphanage. In addition to an autograph from her favourite writer she wants Wrigley to accompany her to MacAlister Honeycup distillers to watch its owner make an essence that is mixed into the whiskey. The secret recipe for this concoction was stolen from Miss Honey's great-grandfather back in 1832 by an ancestor of the present owner of the distillery. Now she wants Mr Wrigley, who as a writer of stories about a female Robin Hood must be an expert in such matters, to help her steal back the secret recipe. The reluctant Mr Wrigley is persuaded to take part in the caper, and together they manage to steal the recipe and a large amount of cash.

The loot is in Mr Wrigley's keeping as Miss Honey is under close police surveillance. An officer saw Mr Wrigley up close while they were escaping from the crime scene in a car driven by Miss Honey's cockney-speaking driver – quite a menacing character when not preoccupied with his knitwork – so Mr Wrigley now also finds himself the object of unwanted attention from goony policemen. Sue, the youngest of the three Wrigley daughters, accidentally discovers the suitcase full of bank notes, and soon all other members of the family – Mrs Marion Wrigley, daughters Sam and Pam – know about all the nice money, though perhaps not exactly how it was acquired. Only Ernest, the fiancé of eldest daughter Pam and a walking-talking encyclopedia who rather too well lives up to his Christian name, is obviously left in the dark. Family members do their best to help daddy fend off bobbies as well as plainclothesmen.

Mr Wrigley and Miss Honey discover that the secret essence, taken undiluted by whiskey, has such a drastic effect that a dose of it results in the normally downbeat but now exuberant and assertive Mr Wrigley cheerfully quitting his job at the offices of The Teenager. Honey and Wrigley write an anonymous letter to Mr MacAlister, telling him he must comply with their terms unless he wishes to see the precious recipe sold to a competing firm.

Constantly harassed by the police, the two decide to return the stolen money and recipe to Mr MacAllister's safe. While doing so, they are caught by MacAllister, who gloats at the prospect of their going to prison for their crime, only to learn that they still have a copy of the recipe and mean to sell it to the competing firm unless MacAllister agrees to turn over half his annual profits to Heather Honey. He gives in to their demands and is even obliged to settle the matter with the police so that the pair go free. Meanwhile the writer who took over from Mr Wrigley shocks his readers by making Miss Robin Hood assist in solving the theft of a Picasso. Everybody is horrified at the thought of Miss Hood being made to 'go over to the other side'. Mr Wrigley is despondent at being out of a job. Apparently Heather Honey is not sharing her half of the annual bribe from MacAlister with him, though this is never made clear. Lord Otterbourne, Wrigley's boss at the publishing company, is desperate to have him back as writer, and Wrigley, with well disguised relief, accepts the offer.

In the last few seconds of the film, it turns out everything was just part of the dream after all.

All credits from the film unless otherwise indicated in footnotes.