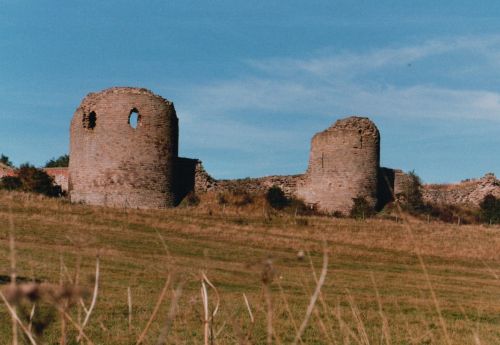 For aught the writer knows to the contrary, there are very few parks anywhere in England like those two in Staffordshire — Bagot's and Chartley. For where else do you find the park without the house? No doubt there were plenty of others at one time, though in many cases only the name remains without the pales. But Chartley is exactly as it was when the Conqueror came — or many a century before his time, except so far as it is enclosed by its fence, which is said to have been put up in the reign of Henry III., when the white cattle were driven in from the forest.

Its castle, which is now in ruins, was built in 1220, [vol. I, p. 136:] by Richard Blunderville [sic], Earl of Chester, on his return from the Holy Land, and from him descended to William Ferrars, Earl of Derby, whose son Eobert forfeited the estate by his rebellion. He was, however, afterwards allowed to retain it. Subsequently it came by marriage to the family of Devereux, and was in their possession when Mary, Queen of Scots, was taken there from Tutbury Castle, in December, 1585, and remained there till she was removed to Fotheringhay, in September, 1586. Before her arrival Lord Essex wrote to Mr. Bagot of Blithfield, asking him to have "all the bedding, hangings, and such like stuffs, removed to your own house for a wile ; and, if she come to Chartley, it may be carried to Lichfield, or els (she being gone to Dudley or els wher) it may be carried back." From this letter it does not seem as if Lord Essex quite approved of having his house turned into a sort of State prison. While there, the queen embroidered a bed with her own hands, which is still at Chartley. Queen Elizabeth came there, on her way to Stafford, in 1575. Li 1781 the curious old manor house was burnt down, while, about fifty years ago, the new one caught fire. Abberley, who is now one of Lord Bagot's keepers, and who lives at Abberley's house, on the outskirts of Bagot's Wood on the Uttoxeter turnpike road, remembers the fire, and was struck with the number of old guns, pikes, bayonets, and the like, which came out of it on that occasion.

"It is traditionally said," Mr. Redfern observes, "that Robin Hood found asylum at Chartley Castle, and its founder, Randall of Chester, is thus named in connection with the famed Robin, by the author of 'Piers Plowman.'

"'I can perfitly my paternoster, as the priest it singeth;
I can rhyme of Robin Hood, and Randall of Chester.'"

Does the coupling together of these two names favour the idea of a Robert de Ferrars being no other than a Robin Hood?[1]

There is an error in Randall's quotation from Piers Plowman: 'I can perfitly' should read 'I can not perfitly'.