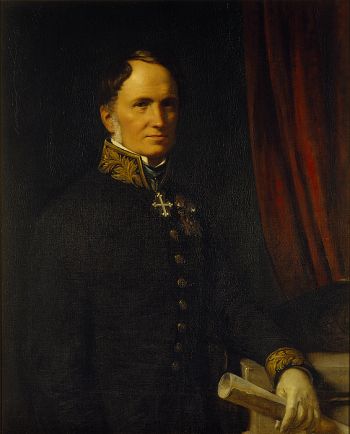 The destination of my journey this day was Doncaster, to which I arrived around 1 p.m. Immediately outside town, [p. 248:] I was shown a well which carries the name Robin Wood's Well after a notorious robber whom Walter Scott is said to have portrayed as the merry hermit in his Ivanhoe.[1]

The original Danish text is in black letter with "Robin Woods Well" in Roman type. IRHB uses italic type for the latter.

Just Mathias Thiele (1795–1874) was a Danish scholar and librarian.[2] While he evidently got Robin Hood and Friar Tuck mixed up, initial [h] would have sounded about the same to a Danish speaker as to an Englishman, and if 'Wood', not 'Hood', was what he heard, then that may well be what was actually said. See further the page on Wood for Hood. What drew Thiele to the Donaster area were the ruins of "Conisbear Castle", i.e. Conisbrough Castle. After spending the day there, "[i]n the evening I walked back to Doncaster. It was a lovely walk and quite a lively one with the multitude of horses and cows being led to the market which was to be held in the town next day".[3]