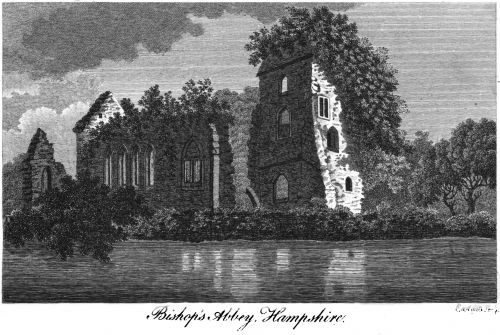 Bishop's Abbey, Waltham, a photogenic ruin in a "small, disagreeable, and ill-paved market-town" / Anonymous. 'An Account of the Bishop's Abbey, at Waltham, in Hampshire: With a Fine View of its Venerable Ruins', The Universal Magazine, vol. XC (1792), p. 241, plate facing p. 241.

Waltham, called also Bishop's Waltham, is a small, disagreeable, and ill-paved market-town, situated at the distance of eight miles from Winchester and sixty-five from London. A palace of the bishops of Winchester, once situated here, gave it the name of Bishop's Waltham. [...] The pensive mind that is fond to explore the remains of desolated grandeur, or to meditate in awful retrospect on the folly of ancient superstition, may here find ample room for reflection. The lover of legal antiquities, the historian of ancient regulations, may likewise find Bishop's Waltham an object of attention; for to the history of this place must we trace the origin of that celebrated act of parliament, entitled 'The Black Act,' of which sir William Blackstone gives this account: 'The statute 9 George I, commonly called 'The Waltham Black Act,' was occasioned by the devastations committed near Waltham, in Hampshire, by persons in disguise, or with their faces blacked, who seem to have resembled the Roberdsmen, or followers of Robert Hood, that, in the reign of Richard the first, committed great outrages on the borders of England and Scotland*.'—It seems. that many years ago, a party of the inhabitants of this town retired to a recluse dell in the New Forest, whence they issued forth in the night; and, their numbers rendering them formidable, they committed great depredations in the neighbourhood, killing deer, sheep, &c. for their subsistence. As they commonly made their appearance in the night, and were disguised, moreover, as abovementioned, they were called 'The Waltham Blacks.' The place of their retreat was a recess, accessible only by a subterranean passage. They dressed like foresters; the cross-bow was their weapon; and it is asserted, that they called themselves the descendants of Robin Hood. In this licentious state they remained, a considerable time, till, at last they were dispersed by the activity of the neighbouring gentlemen, and have not since infested the country.[1]

This is an expanded paraphrase of 1790 - Hookham, Thomas - Tour of the Isle of Wight. Whether or not Bishop's Waltham was in fact as dreadful and utterly insignificant as Hookham and his anonymous paraphrast thought, one would perhaps not expect Thomas Bourn to have found a place for it in his Gazetteer of the Most Remarkable Places in the World (1807 and later). Yet he did, and he says little on Waltham's picturesque ruins, much on its picaresque past.[2] See further Robin Hood's Dell (Bishop's Waltham).