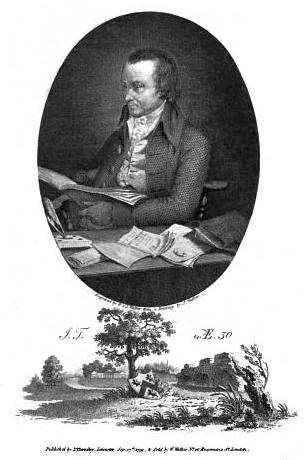 St. ANN's WELL [aka Robin Hood's Well],
Near Nottingham, was, it is said, a sequestered haunt of the famous Robin Hood, which tradition has given celebrity for ages. It is situate within two miles North East of Nottingham, on the base of a hill, which a century ago, or less, was covered with fine ash trees and copice [sic], as well as a great part of the adjacent fields, which are now cleared of wood, and is [sic] become good land; some portion of which still retains the name of copice [sic] and belongs to the Burgesses of Nottingham. The house which is resorted to in summer time, stands near a Well, both which are shaded by first and other trees. —Here is a large bowling-green, and a little neglected pleasure ground. [p. 171:] The Well is under an arched stone roof, of rude workmanship, the water is very cold, it will kill a toad. [...] It is used by those who are afflicted with rheumatic pains; and indeed, like man other popular springs, for a variety of disorders. At the house were formerly shewn several things said to have belonged to Robin Hood; but they are frittered down to what are now called his cap, or helmet, and a part of his chair. As these have passed current for many years, and perhaps ages, as things once belonging to that renowned robber, I sketched them. They are represented on the annexed plate.

A remarkable circumstance happened here about fifty years since. The story is told thus: A regiment of dragoons lay at Nottingham, at that time, and five of the men agreed to go a deer-stealing, for which purpose they traversed, in the night, over a great extent of country, in vain. Chagrined at the disappointment, in passing over av eminence called Shepherd's-Race [aka Robin Hood's Race], near St. Ann's Well, two of them agreed to go down the hill and steal some geese belonging to the people who lived at St. Ann's Well.A young man who was a servant in the family, and had been out late in company instead of going to bed layed [sic] himself down upon a table in a room, or some other ready and convenient place, where he slept sometime; but was awakened by the noise of the frighted geese, which were disturbed by the soldiers attempting to steal them. The young man being a little elevated in liquor had the temerity to go from the house with an intent to protect his master's or mistress's property, in which attempt he was shot through the head, by a piece placed so near him that his brains were seen scattered about him, were [sic] he fell, in a variety of directions.

The particulars concerning this murder did not come out till about 20 years after the transaction, when two old pensioners, from Chelsea Hospital, were taken up for the fact, and brought to Nottingham gaol; but it turned out that the principals, in the horrid deed, were dead.[1]