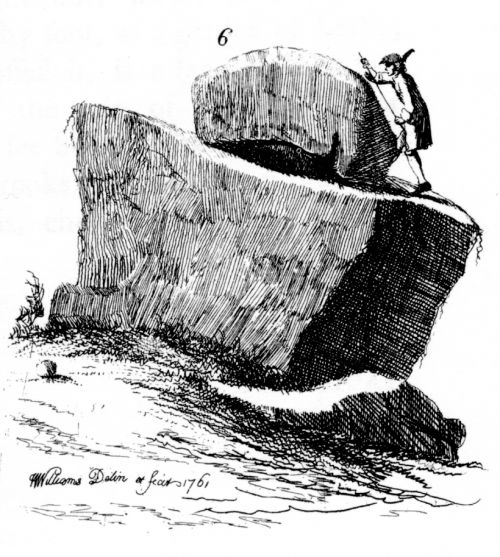 On Saltonstall moor [...] Soon after I had left the moor, on the right side of the road leading to the village of Luddenden, I saw what is generally called Robin Hood's Penny-stone, for the country people here attribute every thing of the marvellous kind to Robin Hood, as in Cornwall they do to king Arthur. Thus, for instance, he is said to have used this stone to pitch with at a mark for amusement; and to have thrown the standing stone in Sowerby off an adjoining hill with a spade as he was digging; but I confess, that some of the common people will smile when they relate these stories; they are not quite so credulous now as their great grandfathers were. This last mentioned remain is a stone of several tons weight, laid upon a massy piece of rock, with a large pebble of a different grit between them, which is wedged so fast, that it is very plain it was put there by human art, or strength. I could not learn whether this [p. 28:] would ever rock or not, (meeting with but one person to converse with,) but if it did, probably it was poised on this pebble, and might some time or other have been thrown off its center. (See No. 6. of the plate.)[1]