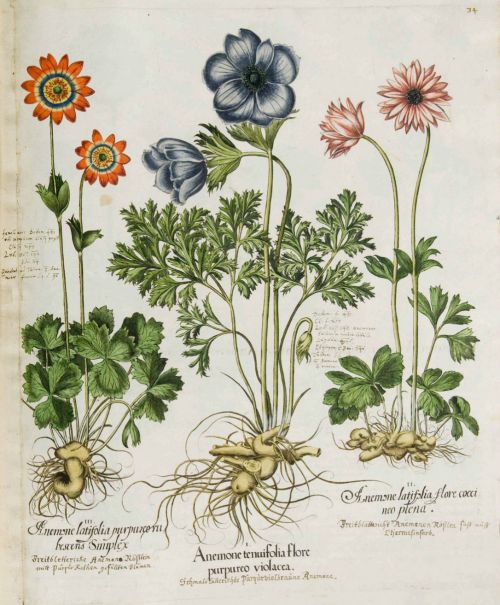 The common great double variable broad-leaved Anemone cometh up before Winter, with many something broad leaves, cut in on the sides and folding the edges, seldome lying smooth and plain, of a fresher green colour than many of those that follow, and a little hard in handling, as all this kind are, and therefore by some called Hard-leaf; from among these leaves riseth up one two or more stalks for flowers, according to the age and bigness of the roots, having about the middle of them some jaged [sic] leaves, as all the Anemones have; at the top of the stalks the flowers come forth, which are [p. 126:] large and double, consisting of many narrow long sharp-pointed leaves, the out-most whereof are broadest and green, with some stripes of Orenge-tawny, the inner leaves are smaller, less striped with green, and the middle leaves being wholly Orenge-tawny, turning inward, cover the head or button which is usual in the middle of the flowers of most of this kind; the root is tuberous, large and thick, of a blackish colour of the outside, and yellowish within: this common Anemone is by many Gentlewomen, and other as ignorant, called Robin Hood, Scarlet and John, and the Spanish marigold; there are two kinds thereof, the flowers of the one being more double and less green than the other.[1]