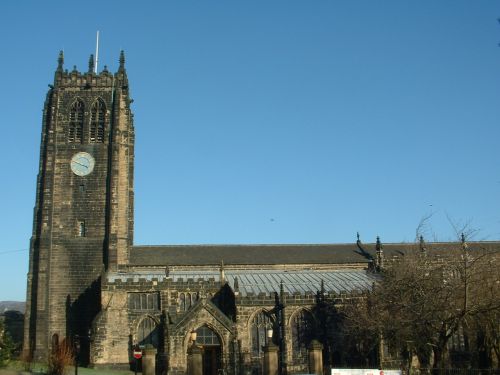 [Letter from John Favour, vicar of Halifax, to John Savile, esq., one of the Barons of the Exchequer, asking him] to take order for punishing one Robert Smyth, commonly called Robin Hood, that hath bene a long tyme a sorcerer and a ffortune-teller, a blasphemer of God, and a seducer of poor people, ignorant but passing obstinate and wilful: getting of servants and children both monye and apparell to tell fortunes, and so following all ffayres and marketts — one of the first order of rogues, and so to be punished. The canons of the Church severely censuring such men[.] Dated Halifax this 7th day of August. 1598.[1]

IRHB's brackets.
The printed source provides no reference to the MS source of the cited passage.

John Favour was vicar of Halifax for thirty years. Born at Southampton, he was educated at Winchester and at New College, Oxford, 1576-92 (LL.S. 31 Apr. 1585; LL.D. 5 June 1592). He was instituted as vicar at Halifax on 3 Dec. 1593, became master of St Mary Magdalene's Hospital there in 1608, collated to the prebend of Oxton in the collegiate church of Southwell on 30 sep. 1611, resigned as vicar of Halifax in 1623, succeded by his son John. He became prebendary of Oswaldwick in York Minster on 2 sep. 1614, from which he resigned in 1617 on being made precentor of York with the prebend of Driffield annexed. He was chaplain to Archbishop Matthew and residentiary of York.[2]

I am very grateful to Robert Lynley for passing this significant discovery on to me for 'publication' on IRHB, complete with background materials and comments. It is highly interesting for at least two reasons. The first is that it is a genuine and indisputable example of "Robin Hood" being used as a nickname. Most of the discussion of "Robin Hood" or "Robinhood" as a nickname, respectively 'nicksurname', has focused on the 13th and 14th centuries, but interpreting the evidence from that period is rarely straightforward. The fact that a given person is referred to in one or more other records by some other name or surname rarely in itself allows us to conclude that a record in which he is called "Robin Hood" or surnamed "Robinhood" exemplifies the use of that (sur)name as a criminal nickname, for "Robinhood" was in use as a family name without apparent reference to criminal activity and people could use different surnames at different times or in different contexts. At least among the lower social classes, fixed surnames seem to have arisen mainly as a means of providing unequivocal identification of individuals and/or their property vis a vis external authorities (or their local representatives). Surnames only became fixed, at least among these strata, during the later Middle Ages. However, by the late 16th century, surnames would to a large extent have stabilized, and it is quite clear in the above quotation that the name was Robert Smyth, Robin Hood the nickname. As Robert Lynley notes, the phrase "commonly called" leaves no doubt that the latter was a nickname. It "gives the strong impression that it was others, the locals calling him that rather than his own penned nickname".[3] As Robert also suggests, the nickname may in part have been inspired by the fact that the fortune teller's first name was Robert.

The second significant point of interest is much more general in its scope. John Favour's letter, it seems to me, would have provided the perfect epigraph to Keith Thomas's seminal and classic study of Religion and the Decline of Magic (1971).[4] There are no doubt still those who are willing to pay handsomely for a software-generated horoscope, as there are certainly now others who prefer to have their genome sequenced by mail order. What they hope to have in return for their money is not the diagram of some celestial conjunction or genetic mutation that spells certain and imminent doom. They would rather buy the hope of a good future or, failing that, just the hope of a future. Comparatively speaking, this market would have been much larger in the late medieval and early modern period, when religion increasingly divested itself of any (overt) magic. Life was still full of dangers and uncertainty – epidemics, death in childbirth, fires in the cities, natural disasters etc. – but official religion was increasingly unwilling to pretend to have any practical remedies, while medical and other sciences were still far from having reached a level where they could begin to provide factual explanations, let alone remedies, cures or precautions based on real knowledge.

By modern standards medical doctors of the time are hard to distinguish from quacks; two illustrations of this are 1774 - Seymour, T - Properties and Effects of the Poudre Unique (1) and 1774 - Seymour, T - Properties and Effects of the Poudre Unique (2). If Robert 'Robin Hood' Smyth was willing to provide services that might influence clients' fortunes rather than just foretelling them and if his methods resembled those of known folk-medical freelancers of his time, he would likely write a prayer or some phrases deemed efficacious on a piece of paper and instruct the client to carry it in a string round his neck for a stipulated period. While it was probably neither more nor less effective, it may well have been less harmful to the client's health than swallowing I. Seymour's 'poudre unique'. As it is, we have no evidence that Robert Smyth attempted to influence the future he offered to foretell, though it can only have been a short step from one to the other, for we do, after all, tend to go to the doctor for help, not just for a diagnosis. Yet certainly a person of Smyth's class, doing what Favour says he did, was seen by the church and secular authorities as meddling with affairs that were well outside and above his sphere. The good parson's indignation may well have been born of concern for his poor parishioners' financial well-being, but it is hardly overly cynical to point out that as providers of assurance he and 'Robin Hood' were essentially competiors.

The whereabout of John Favour's letter are not known to IRHB, but photocopies of his papers from the years (c. 1603-c1611) are held at West Yorkshire Archive Service, Calderdale; see: