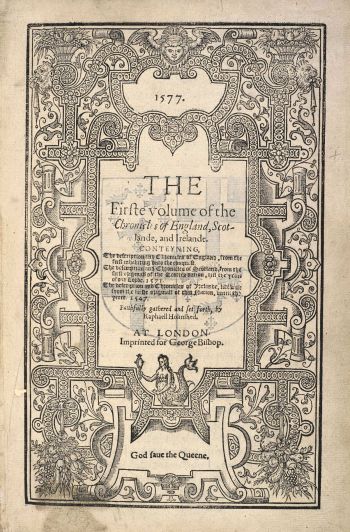 King Henrie beeing not well able to wythstand his aduersaries attempts, requested King Alexander to sende him some ayde of Scottes to subdue the rebels of his realme, that had arreared warres agaynst him.

Herevpon shortly after, was Alexander Cumyn with fiue thousand chosen mē sent by king Alexander into Englande, who right valiantly bare themselues in that warre whiche king Henrie held against his Barons, wherof in the English Chronicle ye may read more at large.

In these dayes (as the translator of Hector Boetius hath wrytten) that notable and moste famous outlawe Robyn Hoode lyued, with his fellow little John, of whom are many fables and mery ieastes deuised and sung amongst the vulgar people.

But Iohn Maior wryteth, that they liued as he doth gesse, in the dayes of King Richarde, the first of that name, which raigned in England about the yeare of our Lord .1198. [1]

About this season, there were great warres in England betwixt king Henrie and his barons, of whome the chiefe was Simon Mountfort earle of Leicester, and diuerse other. K. Henrie being not well able to withstand his aduersaries attempts, requested K. Alexander to send him some aid of Scots to subdue the rebels of his realme, that had arreared warres against him. Herevpon shortlie after, was Alexander Cumin, with fiue thousand chosen men, sent by king Alexander into England, who right valiantlie bare themselues in that war which [p. 202:] king Henrie held against his barons, whereof in the English chronicle ye may read more at large. In these daies (as the translator of Hector Boetius hath written) that notable and most famous outlaw Robin Robin Hood liued, with his fellow little Iohn, of whome are manie fables and merie iests deuised and soong amongst the vulgar people. But Iohn Maior writeth that they liued (as he dooth gesse) in the daies of king Richard the first king of England, 1198.[2]