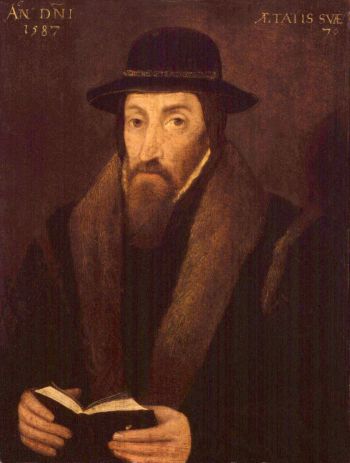 This Ethelwolf [Æthelwulf, king of Wessex 839–58] had especially about him two bishops, whose counsel he was most ruled by, Swithin, bishop of Winchester, and Adelstan, bishop of Sherborne. Of the which two, the one was more skilful in temporal and civil affairs touching the king's wars, and filling of his coffers, and other furniture for the king. The other, who was Swithin, was of a contrary sort, wholly disposed and inclined to spiritual meditation, and to minister spiritual counsel to the king ; who had been schoolmaster to the king before. Wherein appeared one good condition of this king's nature, among his other virtues, not only in following the precepts and advertisements of his old schoolmaster, but also in that he, like a kind and thankful pupil, did so reverence his bringer-up, and old schoolmaster (as he called him), that he ceased not, till he made him bishop of Winchester, by the consecration of Celnoch, then archbishop of Canterbury. But as concerning the miracles which are read in the church of Winchester, of this Swithin, them I leave to be read together with the Iliads of Homer, or the tales of Robin Hood.[1]

This allusion is indicative of an attitude to Robin Hood literature similar to that which found expression in the proverb Tales of Robin Hood are good enough for fools. The Actes and Monuments are popularly known as Foxe's Book of Martyrs.