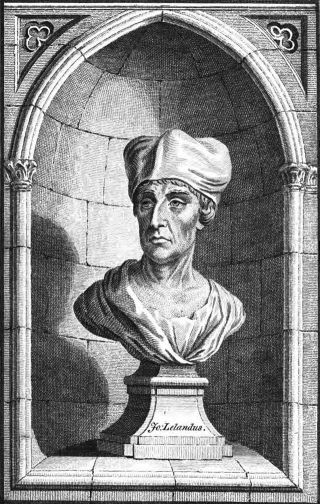 From Shirburne to Milburne village a mile, and passing from thens to Fere brydg apon Aire river a iiii. miles of or more. The brid[g]e is of an viii. arches of stone, and ther is a village.
The soile betwixt neere in sight plaine, wel cornid, but litle wood.
Along on the lift hond a iii. miles of betwixt Milburne and Feribridge I saw the wooddi and famose forest of Barnesdale, wher they say that Robyn Hudde lyvid like an owtlaw.
From Ferybridge to Pontfract a mile.[1]

Brackets as in source.

This entry in John Leland's Itinerary was written sometime in the years c. 1535-43. As Leland rode south from Sherburn-in-Elmet ("Shirburne") via South Milford ('Millburne') to Ferrybridge, Barnsdale would be straight ahead, several kilometers south of him, it would not be "on the lift hond a iii. miles of betwixt Milburne and Feribridge". Although his sense of direction is here certainly at fault and "Milburne village" must be a mistake for South Milford, we should not necessarily find fault with him, as some have, for describing Barnsdale as a "forest". The word has been used in the general sense of an "extensive tract of land covered with trees and undergrowth, sometimes intermingled with pasture" for about as long as it has been used in the legal sense of an area of land subject to the forest law.[2]