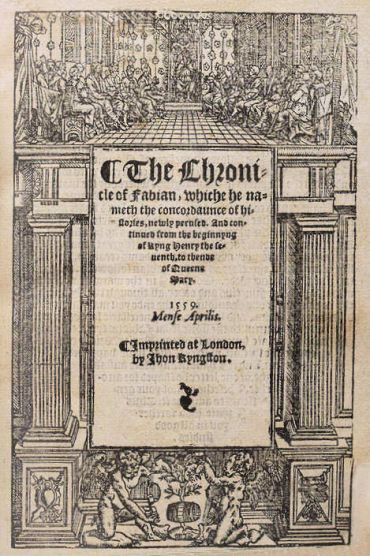 Anno Domini. M.v.C.i.
Anno Domini. M.v.C.ii.
Syr Laurence Aylemer.
Syr Iohn Shaa.
Anno. xvii.
Henry Hede.
IN this yere began the mayre & hys bretherne to ryde to the barge & other places. Vpon saint Erkenwaldes day, was my lord prince maryed to the kyng of Spaynes doughter. And this season the duke of Bukkyngham, wyth other, was chief chalengeour, at a royall iustyce & turney holden in the palays of Westmynster. And thys yere came a greate ambassade out of Scotland, by reason wherof conclusion of maryage was made betwene the king of Scottes & dame Margarete, eldest doughter to oure soueraygne lord. Also thys yere was an excedyng great fysshe taken nere vnto Quynbourgh. And in Marche syr Wyllyam of Deuynshyre, syr Iamys Tyrell, & his eldest son, & one named Welborne, were arested for treason. And in Apryll folowyng dyed the noble prynce Arthur, in the towne of Ludlow. And vpon the last day of April were set vpon the pyllory. ii. yongmen, for defamyng of the kynges counsayll, and there erys cut of. Also aboute thys tyme the Gray Fryers were compelled to take theyr old habit russet, as the shepe doth dye it. And the. vi. day of Maye. Iamys Tyrell, & syr Iohnn Wyndham, knyght, were beheded at the Towre Hyl, and a shypman for the same treason, was the same day drawen to Tyborne, & there hanged & quartered. And soone after a purseuaunt named Curson, & a yoman called Mathew Ionys, were put in execucion at Guynys, & all was for aydyng of syr Edmond de la Pool. Also thys yere, about Mydsomer, was taken a felowe whych hadde renewed many of Robin Hodes pagentes, which named him selfe Greneleef, And this yere began the new werke of the houses offyce within the Guyldball [p. 688:] off London. And in the ende of October was proclaymed a peas betwene the king & the archeduke of Burgoyne. And the Sonday before saint Symond & Iude, was shewed a bull, by vertue wherof were denounced at Poules crosse as accursed, syr Edmond de la Pool, late duke of Suffolke, syr Robert Curson, knyght, &. v. other persones, and all such as ayded any of them again the king.[1]

IRHB's brackets. IRHB's italics (expansions of abbreviations in printed text). Entry for the 17th regnal year of Henry VII; Sir John Shaa being mayor of London; Sir Lawrence Aylmer, sheriff (1501); Henry Hede, sheriff (1502). There are no significant textual variants in the passage relating to Greenleaf among the editions listed below.

The first printed edition of Fabyan's chronicle, by Richard Pynson in 1516 (see Editions below), covers the period up to and including 1485 only and thus does not have the mention of Greenleaf. The passage is first printed in the 1533 edition and recurs in those of 1542 and 1559 (see Editions below). It is apparently also found in one or both of the existing manuscripts,[2] which are both believed to have been written in Fabyan's lifetime. According to the Wikipedia article on Fabyan, although they are not in Fabyan's hand, "it is almost certain that the text [of these MSS] is his".[3] Ellis, the editor of the 1811 edition, unfortunately does not discuss these MSS in any detail. In view of the substantial additions and alterations in the 1542 and 1559 editions and since a holograph does not exist, we cannot feel completely confident that the entry for 1501-1502 was in fact written by Fabyan himself. However, we can at least say that the fact that the last entry in the 1533 edition is for 1509 supports the assumption that the passage on Greenleaf was written not long after the event.

A big fish and a petty criminal

Malcolm A. Nelson considers and rejects the possibility that Greenleaf was a performer in a Robin Hood festival, finding it much more likely, given the context, that he was a criminal.[4] While I agree in the conclusion, I do not really think we can conclude anything from the context – a big fish in the troubled waters of political crime and criminal politics. Fabyan's (or his continuator's?) jottings seem too heterogeneous in terms of topics and significance to allow certain conclusions. The date is much more significant and affords what seems to me a conclusive argument against reading this as an allusion to public measures against popular entertainers: while it is possible Puritan elements of London's citizenry may have looked askance at popular festival entertainments in 1502, there is absolutely no evidence of public authorities at any level taking action against Robin Hood games, May games, morris dancing, Whitsun ales etc. so early in the 16th century. Such entertainments were still (officially) regarded as entirely acceptable means of supporting parish economy. Early in the next decade, the king would be feasted by members of his guard dressed as Robin Hood and his men, and he would himself lead a throng of dancers into the queen's chamber dressed as Robin Hood. Since A Gest of Robyn Hode would likely have appeared in print by the time Greenleaf played his "pageants" in London, it seems likely the latter was a criminal, perhaps even emulating Little John, who enters the service of the sheriff of Nottingham under the assumed name of Reynold Greenleaf, steals his plate and ends up luring him into the hands of his real master. Perhaps someone should take the time to trawl through records and reports of criminal cases from London in 1502?