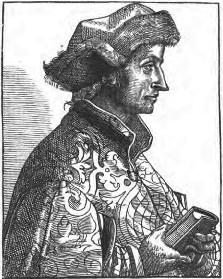 Alexander Barclay, a woodcut included in many early editions of his works (from The Ship of Fools, 1874).

Holde me excusyd: for why my wyll is gode
Men to induce vnto vertue and goodnes
I wryte no iest ne tale of Robyn hode
Nor sawe no sparcles ne sede of vyciousnes
Wyse men loue vertue, wylde people wantones
It longeth nat to my scyence nor cunnynge
For Phylyp the Sparowe the (Dirige) to synge.[1]

Alexander Barclay's Ship of Fools, published 1509, is a Scottish rendering of Sebastian Brandt's Narrenschiff. Jamieson, the editor of the 1874 edition of The Ship of Fools, discusses Barclay's animosity towards Skelton[2] – the last line cited above is a dig at Skelton's Philip the Sparrow – and mentions Barclay's lost work Contra Skeltonum. He suggests Barclay may have been irked by Skelton's satirical comments on priests.

This allusion together with Skelton's appearance as a character in Anthony Munday and Henry Chettle's Downfall of Robert Earle of Huntington (1599) led Paula Neuss,[3] among others, to suggest that Skelton had written something about Robin Hood. The explicit mention of a "iest" of Robin Hood makes it tempting to go further and suggest that Skelton was in fact the author of A Gest of Robyn Hode. The temptation becomes the greater when one remembers that Skelton was tutor to Prince Henry, the future Henry VIII, a monarch who was fond of both archery and Robin Hood. It must, however, be noted that Barclay has two more, quite similar, allusions to Robin Hood which do not mention Skelton, and since "gest" at this time meant an entertaining narrative poem, "iest [...] of Robyn hode" may refer to a kind of poem rather than the specific text that has come down to us. Still, I would not be surprised if it was discovered that Skelton was in fact the author of the poem. He is the best candidate we have.[4]