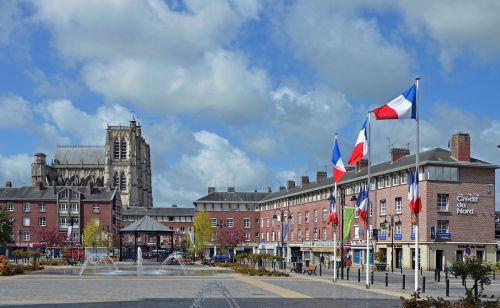 [7 Aug. 1365:]
The like [sc. commission of oyer and terminer] to Richard, earl of Arundel, Ralph Spigumell, Andrew Peverel and William Merlot, touching a complaint by John Petit, merchant of Abbevill, that some evildoers boarded a ship of his laden with wheat and other goods, wounded the mariners, brought the ship and cargo to the county of Sussex and sold the same there.By K.[1]

Ponthieu, with Abbeville as its capital, was alternately French and English during the Hundred Years' War, It was ceded to England following the Treaty of Brétigny[2] in 1360 and remained in Englis possession for the next 15 year or so, except for a brief period when it was recaptured by France. It was thus under English rule when the incident detailed in the Patent Roll entry took place.