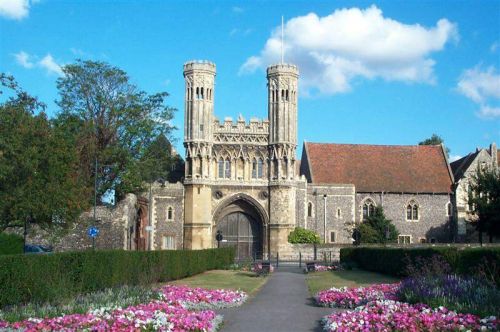 [1332:]
Pardon to the abbot of St. Augustine's, Canterbury, Nicholas Dagh, one
of the monks, John Petit the younger, and Thomas Everard, for having
rescued Master Peter de Dene, said to be a monk of the abbey, from the
custody of William de Reculvre, steward of the liberty of the archbishop
of Canterbury, who, by the king's command, had arrested him, with
William Chaunterel and John his brother, at Bisshopesbourne on an appeal
lately laid against them before the steward by Thomas de Fyndon that they
had robbed him at the abbey of 111 Florentines, worth 33 marks 3s. 4d.,
and of 6 dishes, 6 saucers, a cup, a water-pot and 6 spoons, all of silver,
and 25s. in money, and for having then brought him with the said
Florentines to Canterbury and there kept him in the abbey.     By p.s.
Pardon, at the request of the abbot, to the said Master Peter de Dene for
the robbery, as Thomas de Fyndon has not prosecuted his said appeal
after the king had caused it to be brought before him.        By p.s.[1]