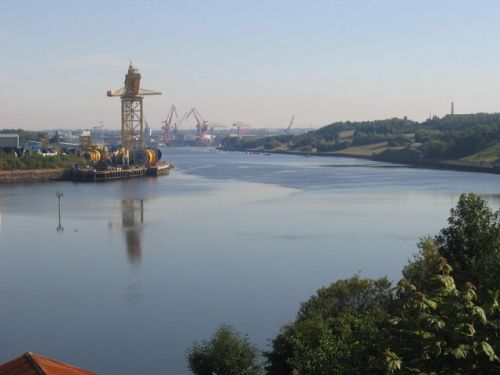 [27 July 1323:]
To the mayor and bailiffs of Newcastle-on-Tyne. Whereas at the complaint of John Vanele and Claisus Hourel of Brugge, merchants of Flanders, that, after the truce lately made between the king's subjects and the men of the count of Flanders until Michaelmas next and proclaimed at Easter last, they and certain of their fellows loaded a ship in Flanders with wine, cloth, wax, and other wares, to the value of 900l., in order to bring the same to Newcastle-on-Tyne, John le Little, Roger Catour, Cokkus atte Wose, and certain others with them entered the ship by force on her voyage thither in the water of Tyne between Tynemuth and Newcastle, on Wednesday before St. George last, and assaulted the men and mariners of the ship, and arrested certain of them with the ship and goods, and delivered them and the ship and a great part of the goods to the aforesaid mayor and bailiffs to be detained under arrest, taking away with them nevertheless a great part of the goods, the king ordered the mayor and bailiffs, if they found the premises to be true, to release the said men and the ship and goods, and the king caused the ship and goods in the possession of the mayor and bailiffs to be delivered to the aforesaid merchants; and the king now understands that the aforesaid Roger and Cokkus have returned to Newcastle; he therefore orders the mayor and bailiffs to arrest the said Roger and Cokkus, and to cause them to be kept under safe custody until the aforesaid merchants have been satisfied for all their goods that came into the possession of Roger and Cokkus.

By K. on the information of Master R. de Baldok.[1]

"Membrane 40."
The passage quoted is a calendar entry, not a translation, of the record.

About 18 months after the above letter was written, the trio of John Little, Roger Catour and Cokkus atte Wose were released from the Tower of London (see link in section "Also see" below). Of course we cannot rule out the possibility they had committed other crimes in the intervening period, but it seems likely their imprisonment was (wholly or in part) related to the incident with which the above letter is concerned. For the career of this John Little and for the name "atte Wose" see Little John the mariner (record texts).